We took Rocco to a State park yesterday. It was his first time with natural water. He waded tentatively at first but kept going back and sniffing. At the next spot there was deeper water. He walked out and when it got deeper he just started swimming. We would have stayed longer but there were other dogs not on their leashes. Rocco was on a 20' lead and started wrapping it around people to get to the dogs. I think it was a hit. The bath when we got home, not so much. He would stand up on his back paws or if we tried to get his front paws in the water he did like a handstand and lifted his back paws out of the water. Never saw anything like that before. Hunter didn't mind baths.
Top

It's so much fun to watch your dog experience water/swimming for the first time. Even though Layla was 4 by the time we adopted her, we're certain she had very limited outdoor time. When she saw her first bird feather she jumped about 4 feet straight up in the air! When we took her to the river, she's barely stick a toe in before she'd turn around scared to death. But she quickly got braver and braver, wading in more each time. And now she's s super swimmer and it doesn't matter if it's winter or summer - she's going in! Pippa, on the other hand, is a good enough swimming but prefers to wade in up to her belly to cool off. But take her to the ocean and she's a big brave girl!! It's just hard to figure ...
Kayla RIP 10/2/15, Pippa, and Layla

My first Brit's was more dramatic. She waded out and seemed to be enjoying herself when she stepped off a drop off, disappeared beneath the surface, and then rocketed to the surface (looking like a trident missile) splashing madly to get back to shore. She repeated the scene several years later when she went into a river to fetch a downed pheasant.

Glad Rocco had a much better time of it than my old Sas did.
Top

We took our 10 month girl Cassie for her first swimming lessons with a life-vest at an indoor dog-pool in our town...She was pretty tentative at first, only wading in up to her legs..It took about four 1/2-hour lessons, a patient trainer, and her favorite tennis ball to encourage her to go in and "float"at first. We brought in another dog to show her it was "ok" to go in on her own - still she would not willingly go in all the way. I took her to the park near a pond with my other dog on a couple of other occasions. She again waded in the shallows watching my other dog swim deeper. Then, on our very next trip to the park, Cassie raced ahead of us. I could hear the splashing in the shallows...she came running back to me very excitedly. She wanted me to watch. I didn't seem worried because of our last experiences and I enjoy her playful behavior when she is curious about things. However this time, for whatever reason, her confidence was clear - she was going in all the way. She plopped in the water like she had been swimming for a year. I think she surprised herself so much that she didn't want to "stop" swimming... I was much relieved that she came back because I was worried she would run out of energy in the middle of the pond and I would have to go in and get her....It just goes to show you though, they will do it when they are good and ready! 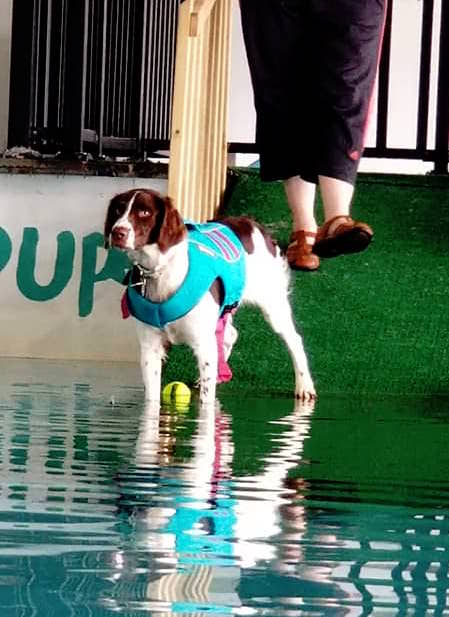