Greetings from a new Brittany owner!

Greetings from a new Brittany owner!

by ramiagonistes
Hi guys. Just got our first puppy and we chose a Brittany. She's a 7 week old girl named Arya. I would attach pics but I don't see the option. Was hoping to get some general advice and any tips/tricks from experienced owners.

Just a little background: I have kids aged 4 and 7, two cats and my wife who stays home. We took Arya home 3 days ago and for the most part she has been pretty good. She usually will eliminate outside and we got her to really like the crater (although we have never closed it on her)

I know that she's a puppy and has a lot of maturing to do both physically and mentally but we want to make sure we groom her to be as good a family pet as possible.

One issue, which is probably to be expected at this age is the nipping. She will often try to nip at our clothes or hands. Obviously it doesn't seem malicious and hasn't hurt anyone but so don't want her to get in the habit of biting anyone, cats included. I've read that when they do nip at you you should firmly say NO and immediately provide one of their toys to bit at instead. Sound about right?

I'm sure I have a ton more questions but I'll leave at that for now. Thanks for your time and hope to be here a while!

by sreali
Hello - we also just got our new Brittany this last Sunday, she is 11 weeks. So, I am new to this forum. The pup is super-smart. I understand her environment before was not in-house (kennel raised) but she seems to have picked up the crate and house training rather quickly. I have had her for five days now and we really seem to be bonding. That being said, I too am wondering best methods that really work to stop the ankle - leg - clothes biting. I have long hair, so she also really gravitates to that as well. Basically, if it isn't nailed down, she is quick to be on it. (God help my curtains and table cloth). I am ready for her puppy-hood antics, but this is one thing I would like to nip in the bud so-to-speak....any advice is appreciated. I will also read the forums for more info...she is really a ball of energy and a lot of fun, thus giving our six year old dog something to think long and hard about, lol...

---
I found the behavior forum in here and found some advice in there pretty useful. The one about the 5 month old puppy Moose, is insightful.

by gagesbarb
Welcome to you both...we're always thrilled to "meet" other brittany lovers

As one of you has found, the older posts contain a wealth of knowledge...use the "search" function at the top right of this page...
Congratulations on recognizing that puppies are puppies, and they are always learning through your interactions...I would also suggest you search out puppy classes (be sure they are exclusively positive in approaches) so you can take advantage of these early weeks of development...

In my experience, puppy nipping/mouthing is universal...I like the idea of always having a toy (in your pocket) and when puppy approaches, give him the toy to chew...ideally before he has a chance to chomp on you--pre-empt/prevent that by redirecting to the toy...be careful not to make things worse by reacting by yelling or pushing the puppy away--puppy thinks you are playing and then you accidentally reinforce the behavior...if you are holding the puppy and are getting chewed on, puppy gets put down and no more attention. An x pen is useful...or gating off a small room...when you approach, don't interact until the puppy sits...he'll quickly learn that calm behavior gets attention and launching yourself, jumping, wild behavior doesn't...attention includes making eye contact with the puppy...The overall idea is that behaviors come in pairs--for every behavior you want to get rid of, there's an "opposite" one you want to encourage/reinforce...so, to stop jumping, reinforce 4 paws on the floor; to stop chewing on you, reinforce chewing on a toy; to stop running through the door, reinforce sitting/standing at the door...Also, remember that puppies this age need to sleep A LOT...18-20 plus hours a day...when they get frenzied, often they need a nap...

just a couple of thoughts...I'm sure others will chime in...

Thank you for the reply. Also thanks to "sreali" for sharing her experiences as well. I am definitely going to comb through the archives here and use that SEARCH function. I imagine that every question I probably have has been answered in this message board at some point. I'm very happy to have found this forum and feel like it can and will be a huge resource!

by Cindy
Congratulations on your puppies!! I'm sure they are adorable and will bring years of joy (and challenges

) to your lives. I am happy to say that I've only had one Brittany puppy (but 6 adult Brittanys) and hearing some of your stories reminds me why

It was so long ago that I don't recall how her training went but I do remember it was an ongoing process for quite a while and consistency was critical. The best thing to do is to search this board and you will discover all kinds of great advice. And if you can, post some pictures!!

by janet909
Congrats to both of you. I LOVED having a Brittany puppy though it was so long ago (16 years) that it's hard to remember. I know we will have one again some day so until then, I will live vicariously through your experiences. I agree with Barb. Getting excited when they nip makes it a game. Ignoring the puppy, after a stern NO, when it is doing something unbecoming will teach him that that behavior doesn't bring attention. Sometimes hard to do but they learn fast. The Brittany brain is a smart one. For pictures, I use Imgur.com. Hit new post and then download your pic. Click the downward arrow on the right upper corner of your pic and click onto share links (something like that), then copy the forum link. Paste it on this page and your picture should show up. This is Peetie and Wesley. I am just posting their pic as I went through the Imgur process so I could explain it. 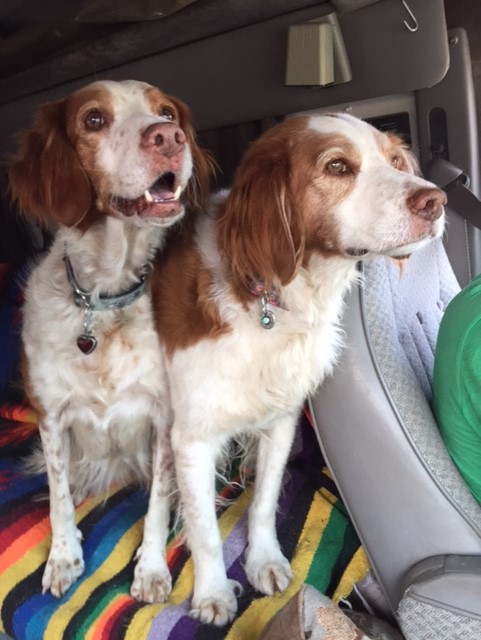 by sreali
Thanks all. I really love having reviewed some of the great experiences on this site and the very useful advice. I guess I never realized how much sleep she needed. I had her out walking and playing (albeit on a schedule) so much that she probably was over tired. So I guess a little more crate time for now until she gets bigger...
Here is a pic of our Cassie by Cindy
So so soooooooo cute!

by MaggieRocks
Awww, she is adorable!!! It's been 10 years since we had a puppy. I remember several times I would be at work, put my hand in my pocket and find a handful of treats. Didn't go anywhere without treats in those days!

Scout has since died (they grow old way too fast darn it) but we got a new puppy this past spring. He will be 1 just before Christmas. So we are going through the puppy stage all over again.

by Barb Wright
Thought I'd throw in a reminder here.....puppy biting and nipping is almost always an INVITATION TO PLAY !!! That is how they play with other puppies/dogs. And one of the important results of this play is bite inhibition, something VERY IMPORTANT that each dog must learn. Okay, we humans aren't equipped to "play" this way (not the proper teeth or inclination), so what's a pup to do???? If there is no way to arrange puppy dates, or even some real fun time with an adult dog, then the onus is on we humans to find other ways to re-direct this purely instinctive behavior and still satisfy it's imperative. You must engage in some form of play with them even if it is not totally fulfilling the reality of pup/pup interaction. Tossing toys and some tug wars are helpful, but you must let go of the tug quickly so the bite does not become "determined". Chase games are good, and tackle games are good, but you must be very careful to not "trap" or confine for more than a few seconds. I would really suggest finding play dates with other puppies and observe how it all evolves, then try to mimic the play as best you can. Optimally, the best bite inhibition trainer is another dog.

Eventually this biting "terrorist" phase will pass, but the puppy will be better served if it has learned how to play with other dogs and it's bite inhibition-learned ability will carry over to other interaction, namely those with human contact. With hunting dogs a "soft" mouth is most often instinctive but proper early usage certainly adds to the inclination.

by gagesbarb
agree with Barb 100% on bite inhibition and how much puppies learn from other puppies/appropriate adult dogs...we teach puppy kindergarten classes for puppies starting at
8 weeks of age...lots of puppy play...so interesting and gratifying to watch how much puppies learn from each other...you see how they learn to try different behaviors to invite other puppies to play, how they learn to say "no" to other puppies. how they learn to wrestle and "bite" safely and how they build their confidence. In an adult class, I had a positive experience with bite inhibition--a 2-3 year old male german shepherd on his 3rd home...we were working on handling, and I watched his "Mom" grab his paw and he pulled it away...this happened a couple of times couple of times as I was going over to them...she didn't realize what he was telling her...I had petted him several times and he was fine, but this time, when I touched his shoulder, he turned and grabbed my arm, showing great bite inhibition...no pressure, just held my arm a few seconds, telling me he'd had enough...fortunately, the owner understood our explanation of what was happening and has worked on positive conditioning with handling and he is much better...but an example of good bite inhibition that he probably learned as a puppy...just dense people who didn't understand what he was saying about his paws...

by MaggieRocks
Yes, I agree with everyone about socialization-both with other dogs and all kinds of people, as well (wheelchairs, walkers, canes, hats, etc.) We enrolled both Maggie and Emma in puppy kindergarten classes. It was wonderful. The classes were small enough to not be overwhelming to the pups, but large enough that they were exposed to different aged puppies, different size puppies, etc. After Maggie graduated from puppy kindergarten (when she was our only pup) we also dropped her off at doggie daycare once per week. She had a blast and the best part was....she came home tired!