by MaggieRocks
Sigh....the posts from Bernie's Mom have me thinking (just a little bit) of puppies. We lost Sammy the day after Easter. Knew the time was coming, just wasn't ready for it (are we ever?) But, he was 15 years & 8 months, so we were blessed to have him that long.

So, we have gone from a 3 Brittany home to a 1 Brittany home, and it sure seems different. On the one hand, things are easier now. On the other hand, Emma is 11 and FINALLY starting to slow down (just a little, mind you

) But I know my husband would like another hunting companion. He's mentioned it now and then ever since we lost Maggie. But, we kept putting off and putting off, not ready to make that move.

Just wondering, those of you who have introduced a puppy or younger dog to an older, more established dog-any tips on what to look for, what to expect? We haven't even started researching breeders. Would LOVE to have another dog that shares Maggie's bloodline. I don't believe Beth is breeding anymore, but I may reach out to see if she knows of any available dogs. (Hard to believe it was 13 years ago that we brought Maggie home!)

by gagesbarb
I don't think I knew you lost Sammy...I do remember that he was having a hard time and your husband had taken to sleeping with him in case Sammy needed anything overnight...
obviously, the match between Sammy and your family was a special one...you were both lucky to have found each other!!

Don't have any personal experience with a puppy and older dog...does Emma like to play with other dogs?
I'm sure there are a lot of people here who have managed situations like that...probably depends a lot on the specific dogs...

by Cindy
Oh no - did I miss the sad news about Sammy too (or have I just lost my mind/memory)?

I'm really sorry to hear about him but he did seem to live quite the life with you guys. Never long enough and NEVER EVER easy to lose a dog even when it's expected. It must be quite strange to just have one dog so no wonder you're thinking about adding another one. I've never brought a puppy into the house with an older dog but Layla (9) would not have a problem with a younger one at all as she still has soooo much energy. From what I've seen with other people in this situation, it seems that an older dog can be a good influence and trainer of a younger one, assuming the older one knows the right ropes. I've definitely seen this with every new dog we've brought in our home. It is getting to be "puppy season" so .......

by MaggieRocks
No, you guys are not losing your minds or your memories! This is actually the 1st I posted about it since we lost him. Was too sad for awhile to think about it. Emma had a vet appointment that Monday. Sammy had a bad day Sunday, so I called the vet and asked if we could switch dogs and bring in Sam instead of Emma. I think my husband and I both thought it might be the end of the road as we drove there. And my common sense vet said yes, she can run tests and find out exactly what is wrong, but what would we do? She said depending on what she finds, he's not a candidate for surgery. And if it's the arthritis meds, what are we going to do for pain relief? He had one tooth surgically removed a few years ago, but he could use more dental work. So we made the tough decision. I miss the old boy. But I can say, it was a lot easier losing Sammy like this than it was when we lost Maggie. At least he had a good long life, and we knew he couldn't keep going indefinitely. With Maggie, we were both devastated. She was so young at just 10, and it was so unexpected.

So now, it's just Emma, our 11 year old "puppy"! I am still shocked when I look at her and see all the white around her eyes-white that was not there a couple of years ago! Guess that shows up on the liver/whites a lot more than on the orange/whites. But, she will always be "the puppy" to us!

by Cindy
UGH - I just hate this for you and everyone else that has ever lost a dog. But young and unexpected is really tough. We lost Jill to epilepsy and she was only 10. She was running through snow covered fields that morning and we had to have her put to sleep that afternoon because they couldn't stop the seizures. My brother (at the beach) just had to have one of his Springers put to sleep. He was 13 and it was totally unexpected. Just so sad for all.

I am still shocked when I look at her and see all the white around her eyes-white that was not there a couple of years ago! Guess that shows up on the liver/whites a lot more than on the orange/whites.

Kayla and Layla - both liver and white never had a gray hair on their face. Pippa is 8 now but she's been turning white in the face for 2 years. My other orange Britts turned white fairly early on too so I don't know. Guess it's just like people - some go prematurely gray.

by janet909
I'm sorry for your loss too. To answer your question, most older dogs figure out life with a puppy. They put the puppy in it's place when the pup is irritating and they also teach the puppy some socialization and proper pack behavior. I don't think 11 is too old unless Emma has and illness or some sort of physical problems that would be effected by an increase in energy in the house. Again, I'm sorry. Good luck with your puppy hunt.

by AuntieMom
CharLee was 8 years younger than Trapper, Kallie and Scout (RIP). We never had a problem with them accepting her even though she was blind. We also fostered puppies at one point and Trapper took great delight in being their mentor (lucky for their new home

) Still, I was hesitant to get another puppy after Scout died but my husband missed having a hunting companion. And now we have our precious little Teddy who is thirteen years younger than Trapper and Kallie, and eight years younger than CharLee. Our dogs are not best friends but they know they are in the same pack.

AuntieMom wrote:CharLee was 8 years younger than Trapper, Kallie and Scout (RIP). We never had a problem with them accepting her even though she was blind. We also fostered puppies at one point and Trapper took great delight in being their mentor (lucky for their new home

) Still, I was hesitant to get another puppy after Scout died but my husband missed having a hunting companion. And now we have our precious little Teddy who is thirteen years younger than Trapper and Kallie, and eight years younger than CharLee. Our dogs are not best friends but they know they are in the same pack.

Charlee is a tough dog and so you are.

by sreali
We introduced our 8 year old dog to our puppy last fall. It has been a learning experience for all. We did not know if they would get along. We adopted the 8 year old boy almost four years ago and he has been such a mild mannered gentleman with the puppy. Never hurting her and even allowing her to have her mouthy ways most days...to a point anyway. We were concerned the dynamics would change with him. It's been almost a year and he is still the good dog we adopted from the shelter. I know the puppy has learned from him how to act with other dogs and learn when enough is enough. They are still learning from each other as she grows. It was not an instantaneous friendship, but the level of toleration is what I have been impressed with from our older one. 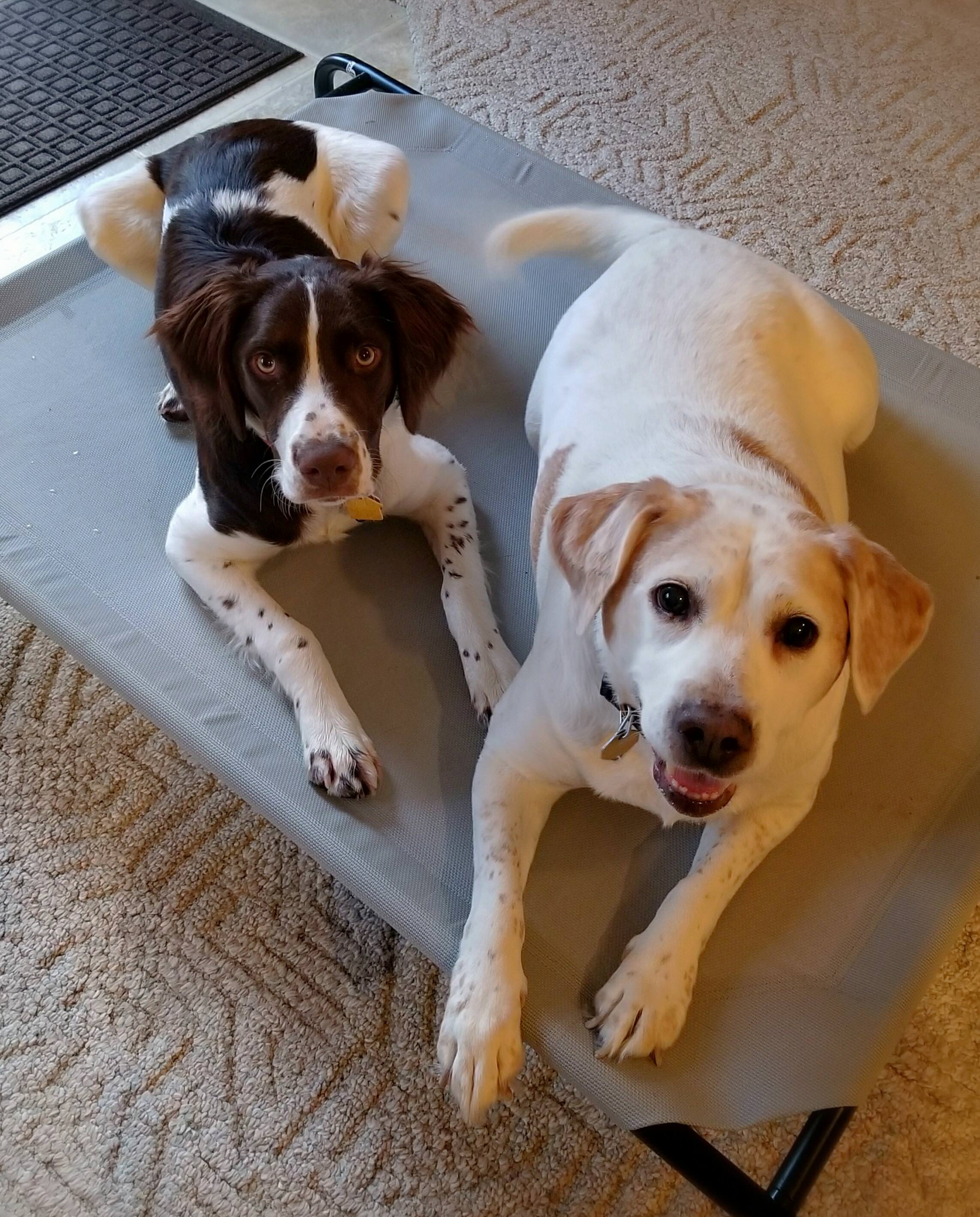